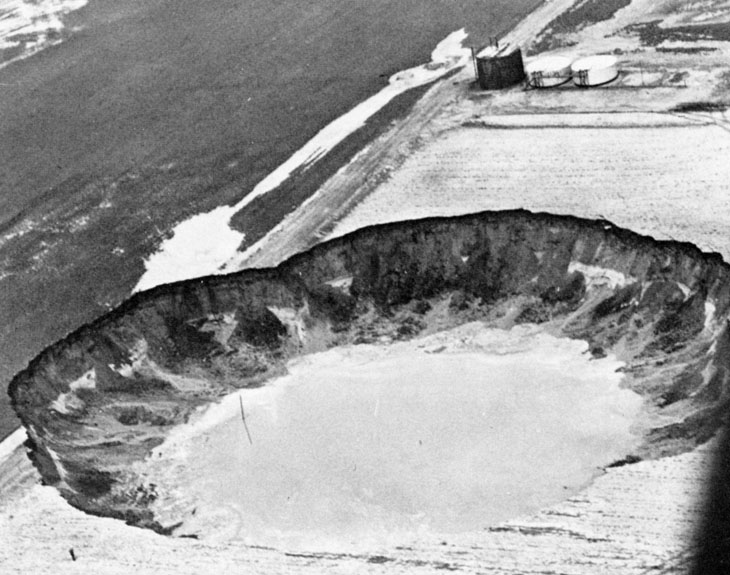 The Panning Sinkhole, located three and one-half miles east and one mile south of Ellinwood, fell in on the morning of April 24, 1959. The location of the sinkhole was an abandoned oil well site. The oil well had been drilled in 1938 and converted to a salt water disposal well in the early 1940s.
The cause of the sinkhole, determined by professional geologist testifying in federal court, was due to a fracturing of the surace pipe when the well was drilled in 1938 This damaged surface pipe when the well was drilled in 1938. This damaged surface pipe allowed groundwater to enter into the casing of the surface pipe and allowed the water to travel down alongside the casing of the oil well. The downward movement of fresh water, entered into a salt layer approximately 1000 feet below the surface, allowed the water to dissolve the salt and be carried to the bottom of the casting, thus creating a cavern in the salt formation. The first indication of a mining action being created by this movement of water occurred in the late 1950s when a drill was inserted into the hole and was not able to go any deeper than the 1000+ foot level. Several years later, the ground above the well site began to subside leaving the standing steel derrick to lean to one side, creating a hazard to anyone in close proximity of the well. Because the ground was beginning to sink and the steel tower leaning so profusely, the decision was made by Pan American Oil Company, the oil firm that had the lease at the time, to plug the well and remove the derrick. The derrick was lowered and part of the casing was removed before the Hole fell in on the morning of April 24 around 9 am. 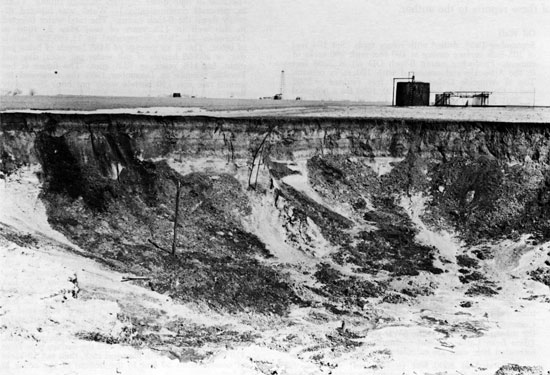 The morning the Hole fell in, Alfred Panning and Larry Panning were standing in the farmyard some 400 yards to the west. Larry was the first to sight the explosion of dirt into the air directly over the well. They immediately drove to the site and viewed what was the beginning of one of Kansas’ largest oil sinks in recent history. The groundwater was flowing into the hole along with large chunks of dirt which were falling in as the and underneath was being swept to the center. The hole was shaped like a funnel and all of the water, sand and dirt were being swept  to a hole approximately 24 feet in diameter and disappearing out of site underneath. Before the hole filled with water the casing of the oil well, the casing of the fresh water well which was during drilling, and many lead lines going to the well were plainly visible. The various soil formations were easily distinguishable by their different bright colors. It was not until after several days of exposure to sunlight that they lost some of their luster. The suction noise was tremendous and could be heard hundreds of yards away. Larry immediately drove into Ellinwood and notified the officials of Pan American Oil Co. After some fast descriptions of what was going on out at the well site, they agreed to come out and take a look. As soon as they realized the seriousness of the situation, they notified the home office. From that point on, thing began to happen that has changed the oil industry and the way they operate today in the state of Kansas. The oil company asked for the help of the local law enforcement officials to supervise the site and prevent any unauthorized personnel from getting close to the edge of the cave-in. A contractor was given the responsibility of putting a six-foot chain link fence around the site as soon as possible. After it was decided by the Kansas Geological Survey that the site had stabilized, they requested that water samples be taken from the bottom, mid-way, and off the surface for analysis. Clarence Binger and Larry Panning launched a boat into the water and lowered an instrument into the water to take the samples that kgs had requested. The three samples were sent to the Kansas Department of Health and Environment in Topeka and it was determined that there were approximately 400 parts per million of chlorides in the water. Over the past 30 years, the salt has diminished to around the 75 ppm level. The hole measured a depth of 85 feet of water and the surface of water was approximately 15 feet below the surface of the ground. Since those measurements taken in 1959, the hole has filled in to where the depth is 56 feet and the diameter around is 400 feet. The subsidence of the land several hundred feet away from the edge of the hole has created an erosion of the surface, leaving deep crevices leading into the hole. 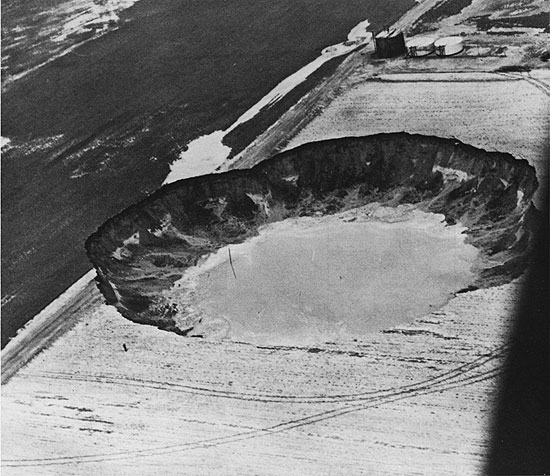 The potential of a pollution source to the groundwater below is serious enough tht the sate has put this well site on their list of possible hazardous pollution locations. With the land slowly sinking around the hole, the danger of serous runoff of rainfall, which can carry polutan lying on the surface directly to the hole, means that the hole is a direct conduit to the grounwaeformations in that immediate area. To date, the only involvement by any state agency was a water sample taken in the summer of the vae in and to take a boat and depth diner to measure the contour of the bottom of the hole in October 1989, all at the request of Larry Panning, the owner of the land on which the hole is located.

Since this publication in 1991, many other stories have been published regarding the “Panning Sinkhole” – such as this one published in the Great Bend Tribune from August First, 2010.

The Ellinwood Historical Society is a non profit organization dedicated to preserving, collecting, researching, and interpreting historical information. "Absolute accuracy in every detail is not claimed. It is not within the scope of human endeavor to avoid error." A.T. Andreas, 1883, author, History of the State of Kansas Be that as it may, a tremendous amount of individual effort has been applied toward making all facts accurate, blog post legible, photos correctly connotated, "Ts" crossed and I's dotted. Please enjoy our website.